This is Dennis, the owner and founder of SuperHeroCrate. So one of the reasons why I started this company was to share my love for comics. For those of you who don’t subscribe, each box comes with at least a couple of comics in them. The main reason why I chose to put comics in each box was because I want you all as fans to discover storylines or characters that you may like, but also writers, artists or even genres to further explore on your own.

I remember someone giving me a trade paperback of the story Identity Crisis written by Brad Meltzer  and absolutely loving it. As a result, I went to my local comic shop and bought two trade paperbacks of other Meltzer stories he’s written for DC. That never would’ve happened if that first story wasn’t shared with me. So when you get a comic in your box that piques your interest, explore it. I want you to go to your local comic shop and discover what’s out there. 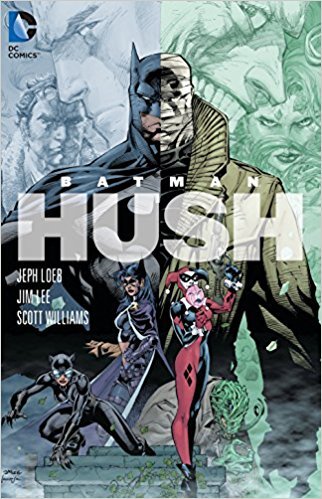 That all being said, I want to start writing a quick review of stories that I’ve read and have enjoyed in hopes that you may also look into them. There are so many that I’ve read that I’ve struggled to decide which story to write about first. Ultimately, I settled on the Batman storyline, “Hush.”I hate spoilers, so I’ll do my best to not ruin what happens! This story is written by Jeph Loeb with Jim Lee doing the artwork. After reading this story, Jim Lee instantly became my favorite artist! Lee does a fantastic job of not only providing detail to the characters and setting in the forefront, but his ability to provide great depth and detail in the background is outstanding. Just Google “Batman Hush” and go to ‘Images.’ You won’t be disappointed!Loeb gives us another classic story of Batman being the world’s greatest detective while also giving us the hard-hitting physicality that we’ve come to enjoy with Batman as well. (I say another, because Loeb is also the writer of The Long Halloween, another classic Batman story. A review for another day.) This story is packed with stars other than Batman, including Killer Croc, Ra’s al Ghul, The Joker, Harley Quinn, Superman, Catwoman, Nightwing and so many more! Like many great detective stories, the protagonist must discover whom is pulling the strings behind the scenes and causing all of the bad things that are taking place. Loeb’s ability to carry on the mystery while furthering the relationships that the characters have with each other is masterful as the conspiracy theories in your head run rampant.This story easily ranks in the top-10 of Batman stories, and personally in my top-5. It’s right up there with the likes of Year One, the aforementioned Long Halloween, Dark Knight Rises, and The Killing Joke. If you’re a Batman fan, or love a good mystery, or simply enjoy great artwork, this is a must read.

Your cart is empty